3K&L, working with tried and tested corporate governance tools, has the right foundation to help companies create appropriate structures. However, tools, on their own, are not sufficient. The experience of the Executive Director and our Partners across the region, is critical in making sure that structures are not just appropriate, but relevant.

We believe that most multinationals have invested significant amounts in implementing such structures and therefore we focus our energies on local entities who require support to compete against those multinationals.

The market for such services is in its formative stages.  Detailed guidance on corporate governance was only introduced in the early 90’s when the Commission of Sponsoring Organisations of the Treadway Commission (COSO) published Internal Control – Integrated Framework. This framework was revised and reissued in May 2013. In the early 2000’s, this framework came to more prominence following the collapse of Enron and other high profile organisations due to ineffective management by senior members of the organisation.

Since then, many companies have worked to bring their companies in line with these requirements, and more importantly, the spirit of these requirements. Because the framework was generally meant to deal with multinationals, many smaller organisations believe that such controls and structures are only appropriate for such large entities, where there is clear divide between ownership of the organisation and management of the same.  There is also a common belief that these would apply more to listed entities as these companies have minority shareholders who have little say in the management of the business.

The above belief is not accurate.

These controls apply too all entities irrespective of size because they too have stakeholders who have little or no influence over the management of the company. These stakeholders include tax authorities, bankers, customers, regulators, and vendors.  These bodies are interested in what is happening in the organisation.

They want to know that; 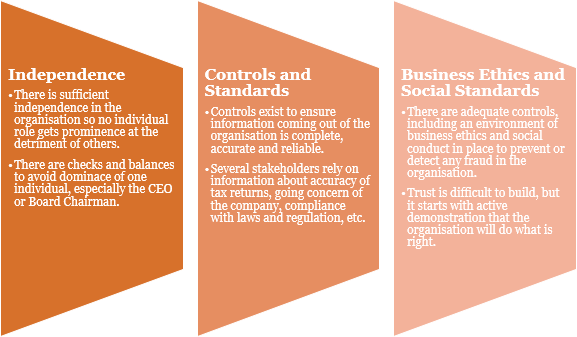 What can we do to make it better for you?